Looking back a year, I see that I spent the day doing similar things: catching up in the kitchen with all the items that I’ve been gathering at Common Ground Farm’s weekly harvest so that they don’t go to waste. It seems as though a critical mass accrues by this time in July. It’s been a year of bounty on the farm. We’ve had a most wonderful variety of lettuce, arugula, turnips, beets, fennel, celery, green onions, radishes, broccoli, kale, mustard greens and other greens, kohlrabi, basil, cilantro, dill, cucumbers, bok choy, scapes, patty pan squash, green zucchini, peas and garlic thus far. Despite the blanching of greens and freezing for future use, the best salads I’ve been eating for lunch, and the sharing of some of the harvest with friends at work, I found myself in the kitchen today preparing several dishes so that I could be on top of the bounty. Given I did this on Independence Day last year, it felt like a tradition was emerging; a tradition that seems to be rooted in the rhythms of the Hudson Valley where local farming has taken root.

Of course there are other traditions for 4th of July. And where else to feel so connected to them but living along the Hudson River where bombs did indeed burst in the air! This year, I’ve been invited to a barbecue and a chance to see the Beacon fireworks in Memorial Park up close and personal. So spending the morning in the kitchen was a simple and centered way to begin the holiday.  Cooking is a flow experience for me. I never feel as present in the moment as I do when I wash, slice, cut, chop, sauté, stir, whip, season, bake, broil, and taste. Even the anticipation of the finished product doesn’t distract from the tasks at hand. It’s a wonderful experience to feel rooted in nourishing the body, mind and soul---all at the same time.

I’ve had years of being inspired by great chefs on TV shows: the Frugal Gourmet, Julia Childs, Jacques Pepin, Lidia’s Italy and now Andreas Viestad and Tina Nordstrom of New Scandinavian Cooking. I call it inspired cooking because there are times that the only measurements are done by eye and taste, not spoons and cups that are exact; inspired because it is the spur of the moment-- what is lying in wait in the cupboard, refrigerator or basket on the counter and what has been purchased that needs to be used up before it spoils. I’m not sure if the only motivation is getting to prepare something that is worth eating or if it’s the challenge of analyzing and predicting what will actually taste good. Either way, it’s a great outcome.
I guess that’s why I find barbecues boring. There is only so much you can do on the grill. From start to finish, it is a bit more precise. So I think I’ll continue to leave the grilling to those who may not want to spend hours in the kitchen, lost in the moment, grounded in the present, and in no need to rush.
Some food for thought: Traditions are important. They are anchors, touchstones, bookmarks and the rituals we create in our lives. How many years does it take to have an event become a tradition? I think it depends on how important the task or the routine is. Sometimes it takes a while to see the pattern of repetition. Other times, it is evident from the start that this is something to return to over and over again. Guess I’ve found my 4th of July tradition: connecting to the earth’s bounty and identifying with the work of farmer’s wives who pickled and ‘put up’ food for future use; feeling independent from fast and processed foods; and being content with the here and now. And after tonight's fireworks with new local friends, Jens & Betty Ann, Steve & Barbara and Mindy [a.k.a. "Princess WOW!"] & Roland (among others), and good food, I hope this new tradition lasts for years to come. 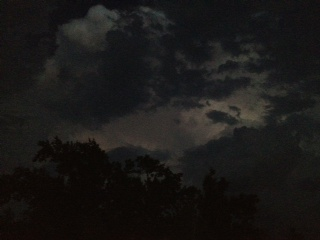 To the right of Beacon's fireworks, which were delayed after a quick and fierce moving thunderstorm, nature had it's own display of lightning behind some nimbo-cumulus clouds, competing and outlasting the colorful and beautiful manmade version

Wash beets and trim. Place into tin foil. Sprinkle with tarragon vinegar and salt. Close foil. Bake at 350 degrees until tender. Rub skins off. Beets are ready to be a side dish or as an add in for salads.

Quick Pickled Cucumber
Place 1 cup water in a small saucepan. Add 2 tbs. chopped onion, a handful of celery leaves, and 2 sprigs of dill. Bring to a boil. Add 1/3 cup tarragon vinegar and 1 generous tbs. sugar. Simmer for a few minutes. Set aside to cool. Slice cucumber into container. Pour vinegar over cucumbers. Refrigerate.
Farmer’s Delight Vegetable Soup
Chop ½ cup yellow onion, 1 white turnip, ½ large green zucchini, 3 stalks celery including the leaves, 3 stems basil, 1 stalk of fennel, 2 garlic scapes, 4-5 large beet green leaves, peas and 1 dried cayenne pepper. Heat 2 tbs. olive oil in a medium saucepan. Add onions and the garlic scapes and sauté until onions are transparent. Then add turnip, zucchini, celery, and fennel to the mixture. Finally, add the peas, basil, greens and pepper flakes. Saute together for approximately 15 minutes. Then ½ cup wine (whatever you have open in the fridge) and 32 oz. Pacific Foods organic beef (or chicken or vegetable) broth. Bring to a boil; lower and simmer for up to 1 hour. Halfway through, open a can of cannellini beans, rinse and add to the soup. Add salt to taste.  This can be frozen for a rainy day. (The cayenne pepper is something that was leftover from last season; I was afraid to use it. It reminded me of the red pepper flakes on the counters of pizzerias that I avoided. But it seemed appropriate to add the ‘heat’ today being 4th July.)

Roasted Vegetables du Jour
Chop onion, turnip, patty pan and green squash, fennel, basil and celery leaves and place into a roasting pan. Drizzle with oil, sprinkle salt, chopped cayenne pepper pod and toss to mix well. Bake at 350 degrees for 1 hr. or until tender, depending on how much you prepare. This is a great way to have vegetables ready ahead of time for several days.

Red-White-and-Blue Dessert for Betty Ann and Jens’ Barbecue
Make 1 pound cake from scratch. (I use a recipe, “Grandma’s Pound Cake”, passed down from a tried-and-true family kitchen, that gives ‘pound’ a new meaning – pound of butter, flour, confectioner’s sugar, eggs and flavored with vanilla and almond extracts.)  Rinse 1 pint blueberries and 2 pound strawberries, hull and slice the latter. Place ¾ cup white wine (I used a German, organic Riesling -- Weingut Heymann-Lowenstein Riesling Uhlen Erste Lage Blaufusser Lay Mosel 2006 from Artisan Wine Shop) and ½ cup maple syrup (I used the local Crown Maple Syrup) into a bowl. Chop 5 to 6 stems of spearmint leaves and add to the mix. Macerate the berries for several hours. When ready to serve, whip 1 cup of Hudson Valley Fresh heavy cream, and when the cream forms peaks, add 2-3 generous tablespoons of crème fraiche (I used Ronnybrook Farms), 2 tbs. powdered sugar and the grated rind from 1 lime. Slice the cake, spoon on the berries with lots of juice, and top with the whipped cream for a finish equal to the fireworks display. 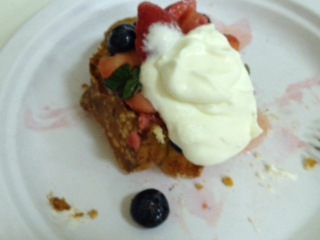 Bon Apetit!
Posted by dr. nadine revheim at 5:53 AM