When you mention the play The Gin Game, you automatically think of Jessica Tandy and Hume Cronyn. You can't help but make the strong association between the very talented, married thespian couple and the classic drama about getting old and feeling neglected secondary to being placed in an "old folks home." So you may understand my hesitation about going to the production at The Beacon Theatre on a beautiful, early autumn afternoon on Sunday 9/23/12. But my ambivalence about attending the performance was softened as soon as I saw the creatively designed set by Jim Brady in the lobby space where plays, comedy shows and concerts have been taking place during the past two years since the benefit kick-off was held in the fall 2010 and while funds continue to be raised for the complete renovation of the entire building. 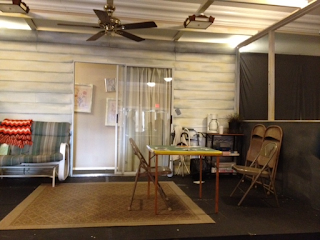 My doubts about attending the play were totally erased when Angus Hepburn, playing the irascible, yet lovable, Weller Martin, appeared on stage, soon to be followed by his wife, Stephanie Hepburn, playing the part of the sensitive, secretive and very lucky Fonsia Dorsey; the Hepburn's, with impressive credentials in NYC off Broadway repertory theater, are now local Beaconites, lucky for us. They previously appeared in  the Beacon Theatre's production of Finnegan's Rainbow and hopefully will star in another production very soon; they are a powerhouse duo that are not to be missed. Performances of The Gin Game are scheduled for the weekend of 9/28-9/30 (Friday and Saturday at 8pm and Sunday at 3pm.) Hopefully, the word is out and the final performances will be well-attended; the Hepburns so deserve a full house. Or is that gin?

Some food for thought:  4th Wall Productions are to be congratulated on their choice and production of this serious comedy about aging, which might make baby boomers cringe, but will certainly give everyone something to think about as health care policies, including medicaid payment for nursing home care, are currently a hot debate in American politics. Whether someone visits a relative in a nursing home or fears being relegated to one at the end of life, the topic cannot be avoided. Focusing on a serious matter while using humor and quirky characters, The Gin Game is a classic gem. Fonsia, so lucky in winning each hand of cards seems to prove the familiar adage true: 'lucky in cards, unlucky in love.' But when it comes to aging, we all need a little bit of luck and a a whole lot of love.
Posted by dr. nadine revheim at 6:05 AM No comments:

Living in the Hudson River Valley has its perks all year long, but they multiply as autumn approaches. The apples in the orchards are ready for picking and root vegetables abound. The changing light creates a warm glow as the sun sets earlier and rises later as we move through the autumnal equinox. The energy level rises with everyone out-and-about for the annual seasonal festivals and competing events scheduled each weekend that celebrate the harvest and prepare us for the dormant period that awaits us in the near distant future.
There's no need to eke out the last few weeks of farmers' markets, however, with Beacon's very own riverfront market continuing through the winter months. But there's a great reminder that you can't get more local when you do go down to the waterfront and are greeted by the Common Ground Farm's iconic bus. 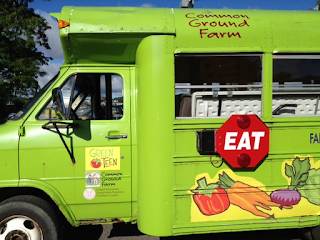 On the grounds of Stony Kill Educational Center, the CSA farm flourished this past season under the steady hand of farmers Tim Heuer and Sam Wildfong along with their team of knowledgeable and hard-working apprentices.
﻿
When you purchase the weekly offerings of produce, which is set up early on Sunday mornings, you can trust that the proximity along Route 9D insures freshness that can't be beat by its competitors. Tomatoes, beets, greens, string beans, yellow and green squash, basil, and onions that easily go from our farm to your table.
﻿﻿﻿ 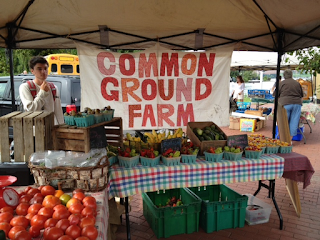 The local Beacon scene abounds with additional home grown talent that ripens this time of year. (Some talent even goes global.) Second Saturday events are well-attended during the brisk evening hours; don't miss One Earth at Fovea, a global perspective on ecological crises. The Howland Chamber Music Circle starts its season once again under the capable leadership of Gwen Stevens who orchestrates programming with aplomb and pulls all the strings to get world-renowned musicians into our acoustically engineered Howland Cultural Center. The Beacon Theatre gets ready to celebrate its Second Anniversary kick-off for renovations, which while still underway, have progressed sufficiently to offer plays including upcoming performances of The Gin Game and Love, Loss and What I Wore. And don't forget the Spirit of Beacon Day on September 30th, which is sure to have an international feel with the cross-cultural heritage of local residents.
One of the understated events recently held at the Howland Cultural Center was the awarding of the 3rd Annual Eleanor Roosevelt Human Rights Celebration awards to Tery Udell and Dan Einbender for their role in starting the Rivertown Kids, a classroom based, community-wide children's chorus; the event was held on Sunday 9/16/12 and was sponsored by the Beacon Democratic Committee. While some of the kids are growing up, they continue their journey knowing they won a Grammy with Pete Seeger for their CD Tomorrow's Children. Hopefully, there will be more eight and nine year olds following in their footsteps by signing up to sing about the present state of affairs pertaining to the environment and human rights and to map out the direction for a hopeful future. 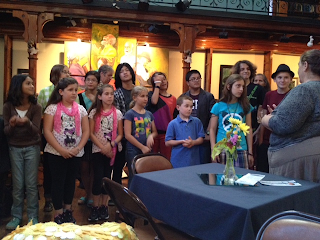 Some food for thought: The local-global connection has a home in Beacon. As we move towards celebrating Beacon's centennial in 2013, there should be no reason to think of it solely as a provincial event. The sense of human connectedness and the power of the community of the 99%-ers who reside here is just a microcosm of a world-wide phenomenon. Beacon, as its namesake suggests, heralds the message that attention should be paid to this specific location at this time. Beacon has something to sing about, to paint and photograph, to grow, and to join hands together to celebrate. There is no better season, as autumn approaches, to be a beacon for the Hudson Valley. Shine on!﻿
Some Upcoming Autumnal Events on the Calendar
Thursday, September 20th - Science journalists Horgan & Revkin, BIRE
Friday-Sunday, September 21st-23rd - The Gin Game at The Beacon
Sunday, September 23rd - Wine 101 - Artisan Wine Shop
Sunday, September 30th - Spirit of Beacon Day Parade, Beacon
Sunday, October 7th - Farm Market Set-up, Common Ground CSA work hours
Sunday, October 7th - Wines of the Loire - Artisan Wine Shop
Saturday, October 13th - 2nd Saturday Gallery Events, Beacon
Sunday, October 14th - Beacon Sloop Club's Pumpkin Festival
Friday-Sunday, October 19th-21st - Sheep and Wool Festival, Rhinebeck
Sunday, October 21st - Brooklyn Rider String Quartet, Howland Chamber Music
Sunday, October 21st - Be Inspired by Spain - Artisan Wine Shop
﻿
﻿
Posted by dr. nadine revheim at 9:40 PM No comments: