We are always remembering what we no longer have or do. I am sure that is how the small group of dedicated volunteers who started the Mount Beacon Incline Railway Restoration Society (MBIRRS) felt when they looked at the mountain and no longer saw the railway, but could still remember the ride up to the top. Mike Colarusso, the current president of the MBIRRS, and all of the individuals who ever worked on the project (including former Beacon mayors Clara Gould and Steve Gold--among others) and those who are still working and moving forward together on the capital campaign (including Frank Skartados, Jeff McHugh, Mayor Randy Casale--among others) had a strong memory of the past or an acute imagination or vision for the future. The MBIRRS website tells the history and the narrative story leading up to the present state of affairs with accuracy and details far better than I can. 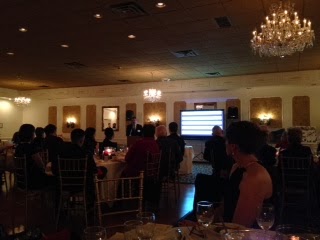 But I can tell you that after attending the Annual Gala for MBIRRS at Dutchess Manor on 12/19/13, the word is official that the support to move ahead on rebuilding the railway is stronger than ever. The most recent initiative is to have the mountain itself become part of Hudson Highlands State Park, which will occur sometime in the spring, while the acreage at the foot of the mountain (e.g., the area surrounding the parking lot and back towards the remnants of the railway) will remain part of Scenic Hudson. It certainly makes sense from a logistical standpoint to gain further support from New York State. After all, it is Mount Beacon that is in our state flag, as you will learn when you view the MBIRRS video entitled "Excelsior."
So if you haven't become a member of the society as of yet, now is the time to support MBIRRS. You can even order items online from their gift shop, like the cap with their logo. If you already have one, get one for a friend as a gift. It is a true vision to get everyone to the mountaintop - those who can still climb and those who may require a ride with ADA accommodations. We all need to get on board.

Food for thought:  This idea that one can use memory to remember the past (retrospective memory) or imagine the future (a form of prospective memory) caught my attention this Christmas season. I said to a friend the other day during a moment of reflection, "Remember, we are always making memories." I realized that this is a good reminder for those who have  either bad memories or good memories about past holidays. Grounded only in the present moment, we can recreate new and better memories that we can take with us into the future or we can recapitulate the memories that we hold dear, but cannot have in the same way because we have lost the people or the places that were their context. The choice of our memories going forward is in our hands from each moment to moment. What a gift!
In Search of New Memories
Four Side Dishes for a Boneless Center Cut Pork Roast Holiday Dinner
(Inspired by my company--Danish friend,Jens Bille and his wife Bettyann, from Gallery  508)


Please note: The pork roast was not shown in deference to my vegetarian and vegan friends. Most of the side dishes shown can be adapted to be vegan. With the exception of the holiday stuffing, the recipes are gluten free; substituting gluten-free bread is possible.
Posted by dr. nadine revheim at 7:23 PM No comments:

This blog post is all food for thought. It has been a week where it has been difficult not to be thoughtful, reflective and emotional.
It has been a week since the tragic Metro North Hudson Line train accident that occurred on Sunday December 1st. That is our train. The one that runs beside our river, as steadfast as the tugs and barges that go north, only to return south. That was our train with our people. The people who commute to work on a daily basis, the people who rely on the convenience of the ride to Grand Central to take in a museum or play in NYC, the people who come up to our town to visit the Dia Museum, attend gallery openings, hike Mount Beacon and Breakneck Ridge and to check out the revival on Main Street.
It was hard not to want to read every article in the New York Times and the Poughkeepsie Journal News about the train derailment. It was difficult not to want to hear the updates on the radio driving to work and reports on the morning and nightly news. It was heart wrenching to know that the majority of the people on the train were residents of the Hudson Valley and that two of the deceased were living within a neighborly distance from Beacon and that a close by neighbor who was a dentist traveling to the convention got on the train in Beacon and was critically injured.
It was difficult to wait for the news. The news that confirmed it was not a mechanical failure. The news that the train was speeding far above the speed limit. The news that reported there was no texting and no alcohol. The news that leaked that the engineer may have dozed off during that last non-stop run from Tarrytown towards 125th Street via the fateful curve at Spuyten Duyvil.
Blame will not return any of the lost life, nor reverse the critical and life-changing injuries, both physical and psychological,  for all the passengers who boarded that train without a glimmer of knowledge that this train would not reach its destination. That  early Sunday morning train that lulled many passengers to sleep. The train that traveled south with the sun rising in the east over the river on a clear but cold winter morning.
I cried when listening to the personal narratives of those who could still speak about their experience of being slammed against the sides of the train car as the cars left the track. I cried when I thought of the engineer, William Rockefeller, also a local Dutchess county resident, that was spoken highly of by neighbors and friends and union representatives; the one who will forever hold the grief, the guilt, and the responsibility for the role that he played in the derailment. I cried when I realized that observers were looking to vilify the engineer without understanding the nuances of circadian rhythms and sleep disorders for night shift workers and how these factors play roles in countless numbers of mass transportation and industrial accidents when workers suffer from chronic sleep deprivation and live out of sync with the natural circadian rhythms that are biased toward daytime work.
I was struck that two of the deceased, Donna Smith, 54, of Newburgh NY and Jim Lovell, 58, of Cold Spring NY were en route to engage in activities related to the festivities leading up to Christmas: the lighting of the Rockefeller Center tree and the singing of Handel's Messiah.  But I was mostly touched by the examples of their lives. They both were involved with family, with community, with activities and work that they were passionate about. Both of them were loving, caring and generous individuals who reached out to others, who practiced countless acts of kindness and who were living the Golden Rule . They were stellar role models for all of us, who like them, do not know when our life will come to an end. It seemed that Donna and Jim were not taking any time for granted; they practiced living the best life day to day. Some would call that spiritual wisdom. I call it a gift for those of us who did not know them, but by their example can dig a little deeper and try a little harder and live to our full potential just the way that they did. With gratitude for their lives, I ask for them to rest in eternal peace.

Links for those who might want to make a holiday gift as a donation in memory of Jim Lovell (for the care of his family) and Donna Smith (for Habitat for Humanity in Newburgh.)
Links for those who want to learn more about circadian rhythms and sleep disorders and the role of the National Transportation Safety Board.
http://www.ntsb.gov/doclib/speeches/rosekind/Rosekind_05162013.pdf
http://safetycompass.wordpress.com/category/fatigue/
www.ntsb.gov
The latter are links passed along by a member of the National Transportation Safety Board, who responded to an email I sent to a researcher at Rush University with a specific and direct request for her to write an Op-Ed for the New York Times to better inform the public about the science of sleep and circadian rhythms.
Sleep induced accidents can happen to all of us. Not a day goes by that I personally am not touched when I pass a certain spot on Route 9D in Garrison where I had a close call with a momentary 'nodding off' this past summer. There but for grace, go I....or you.....
Pause and reflect and take the time to learn about avoiding sleep deprivation that can cause accidents in your life.
Posted by dr. nadine revheim at 11:05 PM No comments: