Just as I pulled up to Yanerella's for tap class on Monday June 25th, a quick moving thunderstorm traveling from west to east, straight up from the Hudson River, along Main Street towards Mt. Beacon, let loose. A drenching downpour ensued intensely for 5 minutes, so I sat in the parked car to wait it out with some concern about the tree limbs that were swaying above. I was able to get out of the car in time to jump the rushing water at the curbside and head under the awning at Dance Bag on the corner of Chestnut Street across from Rite Aid. Since I sensed the timing was perfect, I decided to risk being late for class in order to gaze in anticipation for the break in the clouds in the west until the streaming sunlight emerged. When I turned back to the east, I wasn't disappointed. A most wonderful rainbow appeared in the heart of Main Street framed by Mt. Beacon, which reappeared as the mist lifted its veil after the passing storm had obscured the mountaintop momentarily. 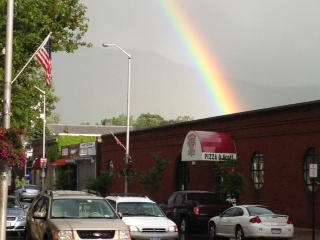 ROY G. BIV intensified over several minutes and the sight was riveting and awesome. 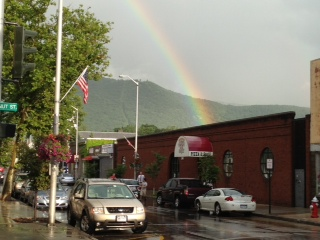 There was an ironic twist as well; I learned that it was pizza, not a pot of gold, at the end of this rainbow. Yum!

And as every good rainstorm does, the air cleared beautifully so that today became a perfect day for my pick up at Common Ground Farm. Peas, turnips, kohlrabi, arugala, basil, savoy cabbage, radishes, braising greens and a couple of sunflower stems were included in this week's share. Receiving the bounty of the earth felt like a reminder of how blessed I was feeling. As I headed home, I remembered it was a primary day and that I needed to stop at the polling place where neighbors sit on the Election Board. I was utterly delighted to see that Pete and Toshi Seeger were heading back to their car just as I pulled into the parking lot. It was an even bigger thrill than yesterday's rainbow to know that I was heading into vote right after Pete and his family. I knew I was in the right place at the right time.

Some food for thought:

Being in the right place at the right time is pure serendipity. You cannot plan it. You cannot take it for granted. You cannot take responsibility for it. But you can notice it. Always be aware of what is possible. Pay attention to subtle cues. Put the cell phone down. Turn off the computer. Stop driving the car. Go dancing. Eat your vegetables. Don't forget to vote. Keep your sense of humor. Open your eyes. Put your hands out. Listen carefully. Take a whiff.  Life can be sensational. 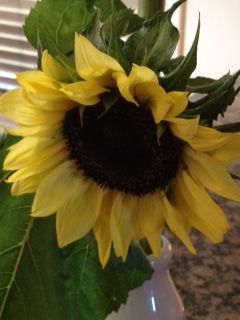 In memory of Nora Ephron, a sensational woman
Posted by dr. nadine revheim at 10:56 PM