It really has been fourteen months since my last post and I have had it on my mind since last March when I was pondering what has happened to the Beacon community with its major construction along the 9D corridor and Main Street. It was only when some neighbors mentioned the blog and it had been the second time that someone noted its absence that I began to think about writing once again. So much had happened that came between me and my musings, but I am starting to feel the need for closure so I thought I'd pick up right where my thoughts had left me last spring.

I guess I was feeling annoyed with the influx of so many trendsetters last spring that I looked at the gentrification occurring in Yonkers and thought that if the new Beaconites wanted a place to live along the Hudson River, there were more opportunities closer to the city to live than to choose Beacon. 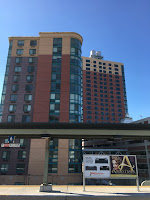 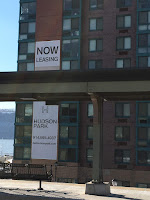 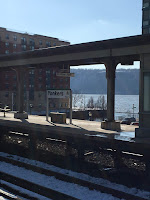 I sensed a loss of community because there seemed to be so many new faces, reckless drivers and lots of strangers visiting town to imbibe in the countless breweries while sightseeing and acting as though they were not interested in growing roots. I projected some of my own frustration about not having as much time to spend visiting the shops that I would frequent and engaging in conversation and activity in the many groups I remained a friend. Daily commuting and other responsibilities were taking their toll on my joie de vivre.

Then I realized that the groups I supported were still going strong. The movie theater, Story Screen, opened long after I had originally donated some seed money to the revival of the Beacon Theater. The Howland Cultural Center was having its celebration and recognition of its leadership after 40 years of existing as the arts hub and "jewel" on Main Street. The Howland Chamber Music Circle was still inviting the best of the best musicians to perform intimately with an appreciative audience. The Beacon Historical Society, in its new home at 17 South Avenue, was making new inroads with those who wanted to know more about the past history of a river town before rushing to its future. The Beacon Sloop Club was still singing and hosting festivals and sailing the Woodie once again. And these are some of the groups that create community amongst neighbors, new and old, so who was I to judge?

So the question of whether Beacon is urban--the new borough of Manhattan, or suburban--just a 70-minute express ride on the MTA train for new commuters, or rural--one of the better places to find community supported agriculture choices nearby, or international--the place that those visiting NYC must put on their list when needing a break from the Big Apple, may not need to be decided since Beacon may be the projective screen so that it will be whatever a person would like it to be.

While recently attending a meeting of the Beacon Historical Society featuring native Beaconite Patricia Schultz who wrote "1,000 Places to See Before You Die" and "1,000 Places to See in the United States and Canada Before You Die", it was clear that Beacon could make the list in the next edition of the book with all of the praises she sang for Beacon's place in the Hudson River. I think I would second that. 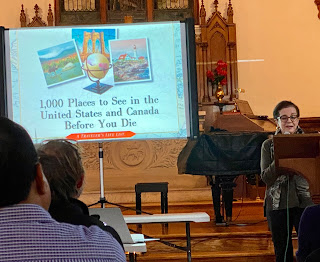 Food for Thought: I guess my desire to start blogging again is born from the adage 'absence makes the heart grow fonder'. The absence of the sense of community is something to rectify. Community is about connection. Connection is about social support. Social support is more than networking with others. It is about feeling nurtured, sharing information and having a sense of belonging. Beacon offers many activities and opportunities for connection; it is time to start exploring some of the old and new ways to meet and greet new neighbors.

Email ThisBlogThis!Share to TwitterShare to FacebookShare to Pinterest
Labels: 1000 Places to See in the United States and Canada Before You Die, Beacon Bits