If you stand on Main Street long enough, another new restaurant will be opening before your very eyes! For the foodies who like to eat out and explore the world's cuisine, the time is right to join the crowds who are heading to one of Beacon's newest eateries, Ziatün, and extend an 'olive' branch to Middle Eastern cuisine. 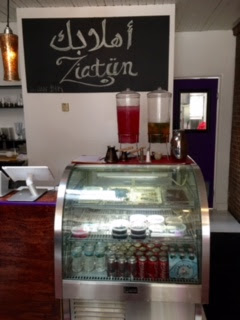 When I first entered Ziatün in early June, the restaurant was vacant; it was early evening, betwixt and between lunch and dinner. It allowed me to focus on the simple and stark decor which evokes an exotic feel with its geometric pattern and physicality of texture and color--very pleasing to the eye and complementary to the anticipated palate. 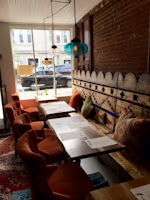 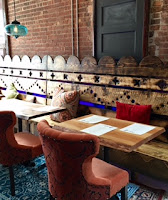 I asked about 'signature' dishes and was told, 'everything' with a special note of attention to the two-sided menu featuring all vegan dishes on one side and meat-pleasing offerings on the other. I sensed authenticity when 50% of the meat dishes included lamb.

On my second visit when I entered to dine, it was quite crowded, but I was able to sit at the overflow counter that is convenient for a solo diner or a small group of friends. I immediately noticed the music, which I was told was a mix of vintage Persian pieces. I chose Fattoush, a toasted pita with lettuce, tomato, cucumber and onion salad seasoned with mint, sumac, lemon and olive oil, and I added falafel in keeping with the vegetarian focus. The crunch of the toasted pita, fresh greens, and tart dressing were refreshing and satisfying for a hot summer's evening meal. (The presentation was so pleasing to the eye that I was eager to dig into the salad and I forgot to take a photo!)

On my third visit, I chose the Kofta Kebab, the closest I could get to my favorite 'kibbeh' dish, which is hard to find unless you are dining on Atlantic Avenue in Brooklyn, which I had actually done the end of May. The blend of skewer-broiled ground beef and lamb, flattened and seasoned with a mix of spices, and served with a yogurt dressing and a cucumber-tomato salad and rice. I asked for more tzatziki dressing and felt the rice was a bit dry, but I enjoyed the flavors and the balance of texture and taste, and easily ate the whole plate. 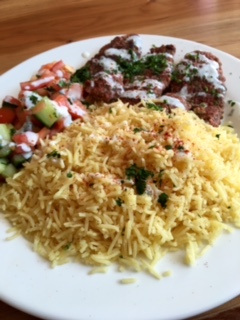 There is no dessert menu as of yet, but the Moroccan Mint Tea and Rose-flavored Lemonade are accompaniments to the varied dishes on the menu, which invite one to return again and again, for the multisensory experience of Middle Eastern cuisine on Main.

Food for thought: I was lucky enough to have Syrian and Lebanese neighbors and friends growing up in my multi-ethnic Brooklyn neighborhood of immigrant families. I watched them tend to the grapevines and rose bushes, pick fresh mint leaves, make their own yogurt (leban), flavor meat pies with spices that were not in my cupboard, offer me pine nuts to taste for the first time, and bake the most delicious cookies filled with ground nuts, honey and dates that were exchanged at Christmas with our Norwegian varieties that were equally special. My mother, who was one of the only woman in the neighborhood who drove a car, was asked at regular intervals to drive down to Atlantic Avenue to visit Sahadi's for shopping expeditions. At that time, it was the only place you could purchase pita bread, if you can imagine that, and it was (and still is) filled with barrels of fruits and nuts, blended spices and special ingredients for those who craved the taste of home. (Now you can also find these specialty food stores in Bay Ridge Brooklyn where the Arabic culture dominates what used to be a Scandinavian haven.) Cuisine that evokes childhood memories and invites us into the world that once seemed foreign and now seems familiar is one that I welcome with open arms in Beacon. Now if we could only get an Indian restaurant on Main Street, I'd be in culinary heaven! Curry-in-a-Hurry anyone?