Long before The Inn at Beacon on Main Street was conceived; years before the Roundhouse opened its boutique accommodations on Fishkill Creek, and even before The Swann Inn opened its doors, the Botsford Briar Bed and Breakfast (BBB&B) was established as the pioneer B&B service in Beacon in 1994. Happy 20th Anniversary! 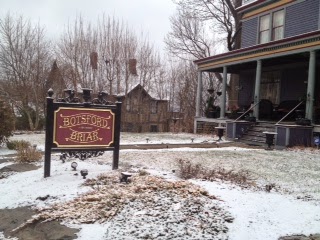 Located on High Street, its purple turrets and iconic Victorian angles are visible from either Route 9D or as one treks uphill from the Beacon train station. Replete with 92 windows and charming stylized one-of-a-kind guest rooms, the Botsford Briar beckons to short-stay visitors, as well as long-term guests, who want to explore Beacon’s charms. 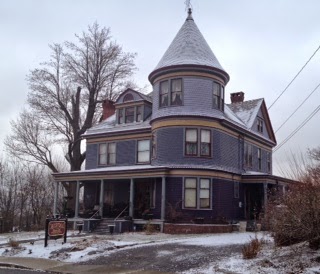 So BBB&B was the natural recommendation I made to a friend who reads my blog and decided to come for the solstice weekend to have a birthday getaway weekend not very far from upper Westchester in order to explore the shops and galleries on Main Street that she’s been reading about for several years. 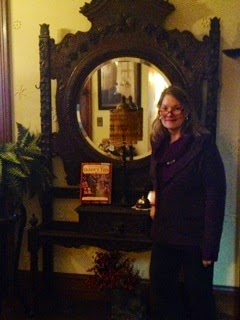 My friend stayed for two nights and had several conversations with Shirley Botsford, co-owner and inn-keeper at BBB&B along with Charles Fincham, and learned that the B&B is in the throes of becoming a school for literary and visual arts (Botsford Briar Arts School) with offerings in writing mysteries, learning to sew/quilt/knit, meditation and new topics on the horizon. Shirley, author of Daddy’s Ties, and a local fine crafts artist who participates in gallery showings, has been a dedicated to hospitality and parlor pleasantries since she first hosted meetings in her home when Dia Beacon was first being proposed! 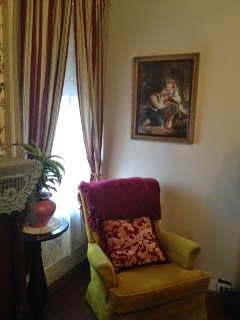 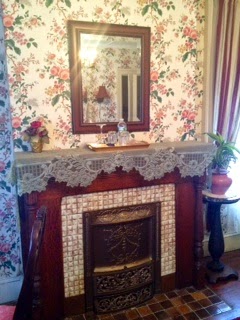 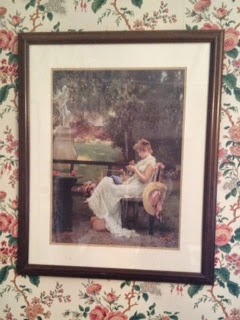 My friend shared some of her highlights of her weekend adventure in Beacon and noted the lovely meal at the Roundhouse after sitting in the lounge “between the fireplace and the falls”; the wanderings into Clay, Wood and Cotton, Hudson Beach Glass, Riverwinds, Beacon Barkery, Gwenno James, Vintage Beacon, After the Barn and other venues along the way. She lunched at the Yankee Clipper because she “likes diners”, had coffee at Beacon Bagels and took note of the other restaurants and boutiques. She liked the pop-ups and the craftiness and appeal of the bicycle menorah and Christmas tree at the Visitors Center.

We had grabbed a quick and very confusing supper at Dim Sum Go-Go before attending the holiday performance of the family-friendly, slapstick production of Cheaper by the Dozen at the Beacon Theatre. We also went to Dia: Beacon after Sunday brunch when we could comfortably catch up and talk knitting. She was enthusiastic about her weekend ambling about town at a comfortable pace, but she did note that many shops “didn’t open according to the posted hours”, reminding me of the adage about the ‘early bird getting the worm’; and she was taken aback at an unfriendly response at a popular coffee shop when she asked about use of the restrooms before she had a chance to process what she might order.

I was concerned that she may have been disappointed about her visit to my town, and that she would not continue reading my blog, but she assured me that the weekend was a lovely gift to herself and that she was pleased with the sights and sounds reminiscent of Beacon Bits.


Food for thought:  There are many times we may not have an inkling of how our words and actions influence others. In friendship and in relationships with significant others, the ability to influence or persuade one another are an important attribute for a successful partnership. Influence and persuasion require trust. Trust builds rapport. And rapport opens us up into possibilities of learning and growing together. My insider’s view of Beacon allowed my friend to express curiosity and to take a risk. Her outsider’s view made me think about how Beaconites need to continue to grow skills in hospitality for those living outside (as well as inside) the community. We both gained a new perspective. And we both gained the gift of renewed and deepening friendship this holiday season.
Posted by dr. nadine revheim at 7:13 PM

Email ThisBlogThis!Share to TwitterShare to FacebookShare to Pinterest
Labels: After the Barn, Beacon NY, Botsford Briar Bed and Breakfast