On November 1st, I went to a lovely BeaconArts Awards event, sponsored by "BACA" and held in the Waterfall Room at The Roundhouse. It was the opportunity to look at Beacon Falls from the other side. 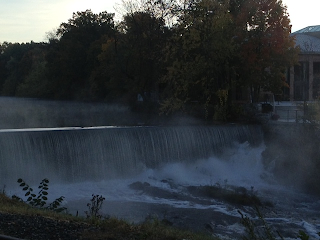 I felt a bit like Alice peering through the looking glass as I looked across the room into the twinkling street lights and back lighting against the rushing falls. The event space is grand in stature; as I entered and walked down the industrial staircase into the depth of what was once a factory with its remnant beams and bricks, it felt magical as transformed space from its humble working class beginnings into a chic, upscale, visually appealing party space. My only hope is that the acoustics are improved so that the banter of the gathered crowd doesn’t reverberate off the sleek glass and steel design; despite the protestation of the owner-general contractor, it appears that the signal to noise ratio needs tweaking for those who suffer from auditory distractions. It would be an easy fix. (Feeling inspired by my first taste of the Roundhouse, I went back to the restaurant Swift a week later, and found the quiet ambiance and food to be comforting and very appealing.)﻿﻿﻿﻿﻿﻿﻿﻿﻿
﻿ 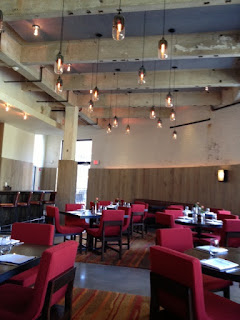 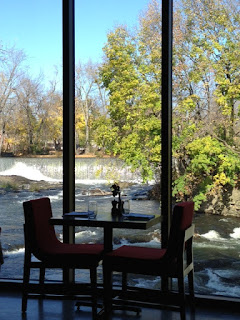 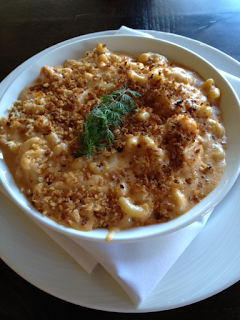 ﻿﻿
Back to the purpose of the early November-evening event: to celebrate 10 years of BeaconArts (formerly known as BACA) by honoring Susan Sayre Batton, representing the Dia Beacon Museum; Margery Groten, representing the Long Dock Beacon project for Scenic Hudson; and Thom Joyce, local musician/entrepreneur and one of the founders of Second Saturday Beacon. The actual awards that were gifted to the honorees were blown glass masterpieces from our local Hudson Beach Glass and were presented by John Gilvey, Katy & Buddy Behney (owners of Mountain Tops, another Beacon ‘power couple’) and Jennifer Mackiewicz, respectively.
Welcoming remarks by Linda T. Hubbard, President of BeaconArts and owner of Riverwinds, highlighted the history of the 10 year old organization whose membership include those invested in the cultural and economic viability of Beacon – artists, shops, restaurants, galleries, and individuals who support the arts. The crowd attested to the heterogeneity of its membership. There were even three mayors present – two from the past (Clara Lou Gould and Steve Gold) – and our current mayor, Randy Casale, who made the announcement that a trolley would begin a route from the Dia and train station up to Main Street on a part-time basis; an announcement that was well-received by attendees. Bob McAlpine, owner of The Roundhouse, also spoke about the renaissance and forward movement of continued construction of a transformed Beacon that many have envisioned for more than the last 10 years and acknowledged the support of Rhinebeck Savings Bank. 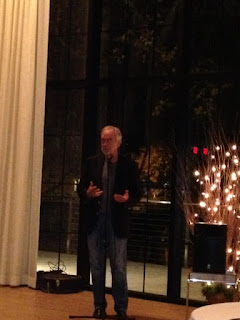 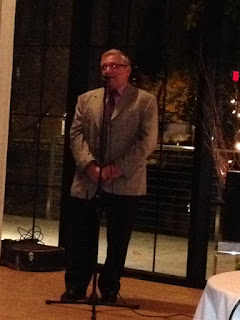 This was a celebration that marked progress and heralded further positive change on the horizon. Everyone in attendance seemed pleased with being a part of the community, in small or big ways, with or without awards. After all, that is how the work really gets done. People keep showing up and little by little, like the incessant drip of water on the stone, all the rough edges get smoothed away. Awards or not, Beacon’s diamond in the rough appeal to so many individuals who keep moving into the community has all the evidence of multiple facets that are emerging and shining ever so brightly.
At the end of the evening, two baskets of donated gifts from Beacon’s brightest and best were raffled off; I had a winning number and won the second basket to my delight! It’s the second time I’ve won a raffle at a Beacon fundraiser in less than a year. Seems like my luck is changing and it’s a good time to take a chance on Beacon; the odds are in favor of more good things to come.

Some food for thought: I once heard a Yiddish saying, which translated says, ‘change your location, change your luck.’ It seems like this has been true for me. Beacon has been good luck for me. I was also reminded after the event when thinking of this good fortune that I was told by my mother that she would 'win something big' for me before she died. Amazing at it seems, I think she delivered; thanks mom.....rest in peace.


List of Vendor Donations for My Best of Beacon Basket #2


Thanks to everyone for your generosity!