As many Beaconites have discovered already, there is quite a strong association between Beacon and Brooklyn other than the letter B; store owners commute from Brooklyn to Beacon, residents have moved to Beacon via Brooklyn from their place of birth across the U.S., and there are those that were raised in Brooklyn, like myself, who kept moving up river to the Hudson Valley region. I glimpsed another aspect of this Brooklyn-Beacon connection at May's 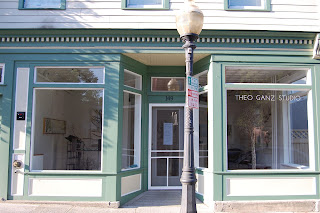 Second Saturday when I attended the opening of a new gallery, Theo Ganz, at 149 Main Street. Large paintings of trees found in Prospect Park and the Brooklyn Botanical Gardens 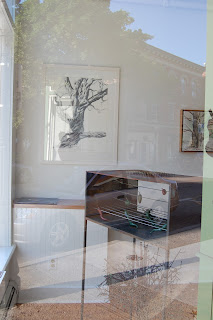 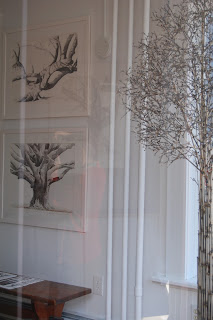 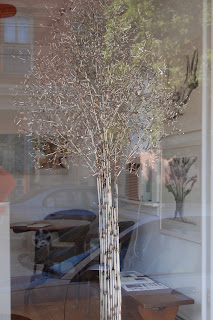 created by Swedish-born Anders Knutsson are placed in juxtaposition with metal sculpture, including a six foot tree by local Korean-born artist, InSun Kim, bringing us to another connection: the multicultural aspect of both Brooklyn and Beacon. The light in the gallery complemented the refurbished space where Clay Wood Cotton had recently vacated for their new location; the warmth of the early May evening was mirrored in the hospitality and comestibles provided by Canadian-born gallery owner and artist, Eleni Smolen, who also moved to Beacon via Brooklyn. The cool crisp lines of the compact space with the soft feelings of Anders' life-like representation of boughs and trunks of old tree spirits and the hard copper and silver-toned carpenter's nails, sheet metal and found objects in InSun's sculptures are an open invitation to "Segue" (as the title of the show intends) for all the gallery browsers who helped make the inaugural opening feel so special. Its' close proximity to Fovea, (where Rob Penner's photos depicting "Beacons of Music" can be seen indoors, as well as outdoors on the facade of the factory building next to the Roundhouse, which I made sure to see since I had missed the April 14th opening), will make Theo Ganz a special stop on the monthly Second Saturday circuit. Both exhibits will be ongoing through June, so additional visits are possible for a first or second look to relish the respective shows.

﻿
Speaking of special, Homespun's candelight atmosphere for a light, but filling, supper of wonderful crabcakes evoking memories of Maryland for anyone who has indulged during a trip south. And what more perfect ending for the evening could there be but a Zora Dora gourmet popsicle treat.

Some food for thought:  Enjoyable routines are a welcome relief for the day-to-day stressors and hassles that we bear. The relaxed exploration and novelty that Second Saturday events offer Beacon's community are exceptional opportunities to unwind with friends, or to enjoy while traveling solo. The evening can be as simple or complex, as fast-paced or slow, as long or shirt, as inexpensive or not, but it will always be guaranteed to deliver inspiration and reduce stress. It's a monthly routine you shouldn't resist; it's a habit worth developing.