I was having recurrent urges for a Poppy's burger for the last month on two separate occasions. I even planned to take guests visiting from Norway and a cousin from Pennsylvania, but realized too late that it was Monday and Poppy's is closed (on Tuesday as well.) I finally got my Poppy's burger and fries last week and had a conversation with Paul Yeaple, the owner, about his choice to be closed on Mondays, a day that I imagined would be great for business, especially in the summer when visitors on holiday are stopping in Beacon. He explained that with two children under the age of two at home, his priority was to have time with family and not become a workaholic, absent father, reminiscent of his own hard-working dad. How could I argue with that? It was just another reason to admire Paul's business practices and personal ethics. 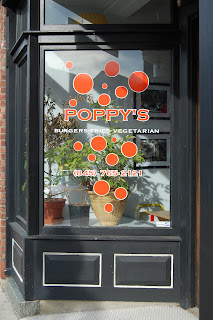 I first learned of Poppy's from a Hudson Valley magazine article in 2009 citing 'the best of' in Dutchess county. I had been making weekly visits during the year before I moved to Beacon and made it a point to find Poppy's. With my first bite of the organic, grass-fed beef surrounded by a soft bun with the crispiest fries served in a brown paper bag, I was hooked. For someone who has only eaten 1 or 2 burgers a year for the last 35 years, the fact that I've now averaged 1 burger a month, totaling at least 10-to-date, it's truly a very big compliment for the chef. Paul says I must be like a 'burger-meter'; if the burgers aren't good, I can live without them and pass them by, but if they're like his, I'll channel my inner Burger Queen and become a frequent flyer!
Paul was pleased to tell me he now offers local New York beer (e.g., Red Tail, Saratoga, Phin and Matt's), a hallmark of supporting locally grown products. Wine is one the way as well. Paul knows what his customers want and it's also a way of compensating for his family time off if the tabs grow a bit fatter because there are more choices for beverages to drink with the variety of burger specialties that are offered.
Last spring, in between Poppy's visits, I watched the Food Network channel on cable TV and caught an episode of Chopped and there was Paul creating a full course meal with the eclectic list of ingredients given as a challenge. He won; his crowning achievement was a zucchini sorbet while slicing his hand open because he was moving so fast. I was so excited that the 'home team' won, I couldn't wait to rush in and congratulate Paul, only to find out the show was a re-run. A bit humiliated for not knowing the good news was old news, I was still thrilled to see his culinary talents rise to the top. Seeing his creativity and skill come to life only made me appreciate his concept of running a restaurant with a simple menu and niche market congruent with the slow food movement.
Some food for thought: Sitting alone in Poppy's at a modest metal frame table, I saw the face of Beacon -- the hard working entrepreneur, a dad and his son using the pinball machine while waiting for take-out supper, two other local merchant's picking up a meal as they gave a pitch to sign a petition to allow Beacon to close Main Street to host a car show, two young teenagers looking for a summer job, and a college student home for the summer working the counter and taking orders. This scene repeats itself in various permutations, including visitors from out of town ambling up Main Street after touring Dia Beacon and multi-generational families dining together on a weekend night. Poppy's is a place to graze, live in the moment and feel the heartbeat of Main Street. Customers listen and talk to each other casually; Paul's affability is notable as he chats with each individual and doesn't miss a beat in recalling his last conversation with the local Beaconites.
I look forward to the day when Poppy's is open on Mondays because Paul can have his children in tow. I also would feel less guilty about increased visits (could I be thinking once a week?) if Paul would offer some local organic salads or cooked greens as an accompaniment to the best burger in town. Two wishes for an otherwise extremely well-fed and sated customer. Too bad it's Monday, I'll have to wait to tell Paul what I think -- a good excuse to visit Poppy's sooner than I planned, along with all the other new and repeat customers reacting to yet another rave review in Hudson Valley magazine's "Burger Bonanza" issue (August 2011.)
Written July 25, 2011
Posted by dr. nadine revheim at 10:28 PM