Recently standing on the corner of Main Street and Cross Street, the saying "something old, something new, something borrowed, something blue" came to mind. My association was attributed to the juxtaposition of the longstanding Hudson Beach Glass, which faces the Culture Club Cafe, next to the Marion Royael Gallery, which is across from the vacant lot used by Beacon 3D, with its adjacent brick building for sale.

Hudson Beach Glass is tried and true. It is 'old' by Beacon's Main Street standards for revitalization and renewal, but not at all old in its fanciful objects d'art, recurrent gallery openings, and ongoing creations with resident glassblowers. It is fired up and ready to go the distance! 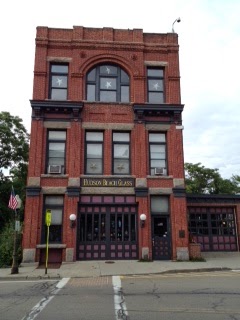 Culture Cafe-Bar is one of the newer eateries on Main Street with a varied menu, personable hosts, and wonderful backyard garden for outdoor seating. It is open seven days a week and has already gained a following of regular diners. I found myself eating with friends on two different occasions over the course of one week. Both times I had pasta offerings (pumpkin ravioli, now off the menu, and spaghetti squash with angel hair past) and felt satisfied with the portion and the flavors. Given its popularity, it will be interesting to see how the smaller indoor accommodations will alter availability for dining during the winter months. 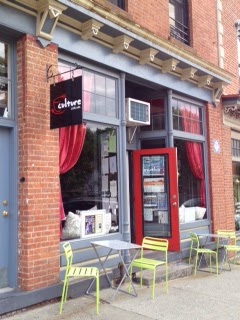 My all time favorite Beacon gallery, Marion Royael, has been back in town for several months now, and it's still the buzz on Second Saturdays despite its move from the 'east end' to the 'west end' of town. I mourned its loss when it closed its doors in Beacon for a trial run in the city; I'm thrilled to see it 'back home' and just hope it's not on borrowed time. 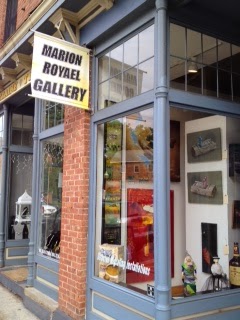 As for the fear of the unknown and anxiety about losing open space on Main Street, the 'for sale' sign on the handsome multi-family brick building with commercial space, evoked a blue feeling. My mind immediately went to two questions, 'what will change?' and 'how long will it be before we know what will happen in this corner of the world. 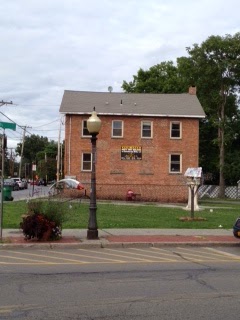 Food for thought: Change is never easy. Transitions are buffered by holding onto some of the old ways with its adopted and borrowed traditions. Beacon is 'changing' as those who attended Second Saturday in August noted. Each week it appears that the liminal threshold of a town that was "becoming" to a town that "is", has been surpassed. Paying attention to the  early signs at the crossroads suggests that there may be other intersections to ponder. Looks like it's the perfect time to take a walk on Main Street from end to end to explore the art installations that are collaborations between Beacon's artists and business owners; visit WOMS through September 13 and vote for your favorite installation.