No matter what side you are on, everyone has an opinion about gun control in the United States. If you've ever been to a gallery show at Fovea at 145 Main Street, where photo exhibits showcase international photojournalists, you know that you will walk away with a wider vision of what the issues are, whether the focus is on stigma and gays in the military or environmental and food concerns caused by industry or the aftermath of 9/11 in the rubble of the towers or what it is like to live with a disability. So you can be certain to expect that your mind will be expanded when you visit "The Gun Show", which is open through October 6th, whether or not you have already attended opening night in July or during a panel discussion and film viewing in August on recent Second Saturdays, or that you may need another look before the show ends. 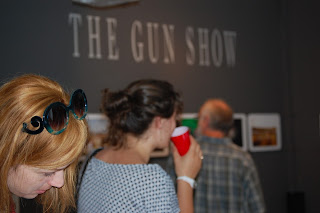 The exhibit is curated by Neil Harris, Associate Photo Editor at Time magazine and features seven  photojournalists -- Jesse Burke, Ty Cacek, Barbara Davidson, Jon Lowenstein, Drew Ludwig, Erin Trieb, and Pete Muller. Photographs depict American citizens with guns used during shooting practice, for hunting, in the military, as well as, photos of families and communities affected by the aftermath of gun violence. One of the most haunting pictures in the series is a staged orchestration of target practice in a school setting, suggestive of the shooting at Sandy Hook elementary school. (See review in Poughkeepsie Journal News.)
One could say that the seed  for the show was planted by a grassroots group (Hudson Valley Committee Against Gun Violence), which met under the leadership of Stephanie Heimann, co-director of Fovea (along with Sabine Meyer.) Members of the group insisted that Fovea could be a visual vehicle to educating the public about the gun culture in the United States. Stephanie worked her magic and turned to fellow Beaconite Neil Harris who in turn connected with those photographers whose work he was familiar with and could draw upon for such a themed show. It seemed magical to know that all this networking and behind the scenes work could result in three months of a most important and potentially controversial exhibit in the simplest and most direct way --- that is, letting the photos tell the story, without narrative or debate or argument. Just photographs that show a viewpoint so that an experience is created for the person looking at the photo. One could say that the time and talent spent on creating this exhibit is an attestation to what Margaret Mead stated about 'never doubting what a small group of people could achieve.' 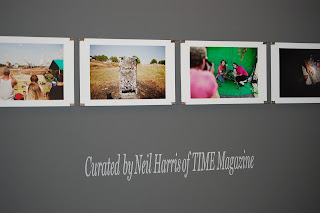 As if the still photography wasn't enough to contemplate, Stephanie was further able to collaborate with Terry Nelson of the Beacon Independent Film Festival (BIFF) to bring the film, "A Son Down, After Sun Down" to Fovea during the second month of the show. The film is about gun violence close to home. Filmed in Newburgh and Poughkeepsie, the film was an intimate look at men who rely on guns for survival because they are captive in poverty and the street culture. Director Chrisopher Zino Sarmiento was present for a panel discussion along with Monte Frank from the Newtown Action Alliance and Andy Pelosi, president of the Campaign to Keep Guns Off Campus. I received a surprise invitation and honor to moderate the panel on August 10th. (Click on link to see the panel video on the Fovea website. Excerpts of my comments are shared below.)

Fovea will host photographer Erin Trieb who will give an artist talk on her experience documenting gun culture at Second Saturday event on 9/14/13 at 6pm.

Some food for thought: It is a true treasure to have Fovea located on Main Street in Beacon. I honestly don't know if every Second Saturday attendee knows how special this exhibition gallery is -- but I do know there are many 'groupies' who appreciate and support what Fovea is all about. I still have hopes that Mayor Bloomberg in NYC would take note of this exhibit and fund it to send it on the road, across America, to every American community that needs to take a second and third and fourth 'hard' look at the gun culture in our country. It has been said that 'a picture is worth a thousand words'. "The Gun Show" illustrates this point; it is just too important to stay local. This "Gun Show" needs to go on the road and travel along with all the other gun shows, the kind that usually comes to mind when you hear the phrase, in order to present a thoughtful and balanced perspective on what someone actually buys into when they purchase firearms.


Comments for the Panel Discussion on August 10th
The fortunate thing about being at Fovea and discussing the various points of view of gun violence in American society is that we are not gathered here to be like the ‘blind men and the elephant” – the well known story that depicts the human limits of perception based on the various ‘parts’ of the ‘whole’ that we come in contact with.
No -- we’re not here to ‘stick to our guns’ and focus on the areas of concern we are most familiar with.


But rather, we are here in the context of The Gun Show, curated by Neil Harris, with multiple points of view of several photojournalists showing different perspectives of a highly charged issue in American culture: our relationship with guns and the impact of guns on our society.
We’ve just seen a film that is ‘loaded’ with so many rich images and stories of guns and violence that it has probably taken our breath away to imagine daily life as it really is as told in the stories of the lived experiences of those interviewed in the film. And we will talk more with director Chris Sarmiento about the perspective of his film and the men he brought to us who are immersed and trapped in a gun subculture that transects matters related to socioeconomic status, illiteracy, race and imprisonment – right here, close to home, in our bucolic Hudson Valley.


We have a member of the Newtown, CT community, Monte Frank, who represents the Newtown Action Alliance, an organization that emerged from the perspective of random and vulnerable victims of violence and the impact the tragic shootings at Sandy Hook elementary had on personal awareness about gun violence and the desire to use a new level of consciousness to be proactive – all from a reactive position.
And we’ll talk more with Andy Pelosi, president of the Campaign to Keep Guns Off Campus, an organization that aims to use primary prevention to mitigate potential violence by limiting the firearms that can be carried in public places of higher learning.


So we will try to use Fovea’s perspective of keeping all the issues in focus as we move through the Q&A that I will start amongst the panelists and from the subsequent discussion from you, the audience.