Within the span of a week, Beaconites could support Hurricane Sandy victims living in Breezy Point by attending a benefit concert at the Howland Cultural Center on Second Saturday (1/12); join the community chorus, which meets weekly on Mondays 7-9pm at the Howland Cultural Center (1/14); attend a fundraiser sponsored by the Beacon Democrats at the new restaurant/music-lounge/art gallery Dogwood on East Main Street (1/16); join the local MoveOn organization community group for planning and supporting the movement against gun violence in the U.S. held at Fovea Exhibitions (1/17) ; and/or attend a lecture on alternative energy sources such as solar and geothermal by local experts sponsored by the Beacon Sloop Club (1/18).
Wow! Never have I lived in a town that has offered so many choices and as many nonstop opportunities to mobilize around justice, environmental, political, social and cultural concerns, on a personal-local-national-global level! Unfortunately, I wasn't blessed with the time and energy to indulge in all of the events, which I hoped to do, so I had to choose carefully. I'm very pleased that I chose to attend Thursday's event at Fovea, where a bakers' dozen of concerned Hudson Valley citizens from Beacon, Cold Spring, Peekskill, Poughkeepsie and Orange County convened to follow the MoveOn agenda regarding support for gun control legislation. 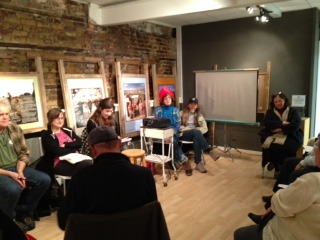 After introductions and brainstorming ideas, it was clear that this multi-talented group of teachers, engineers, advertising executives, artists, musicians, grassroots organizers, nonprofit administrators, renaissance thinkers and mental health professionals will try to move mountains when it comes to supporting President Obama's proposed legislation intended to mitigate gun violence in America.  A big thanks to Stephanie Heiman, co-director of Fovea for hosting the gathering and garnering the local energy to direct efforts by sharing resources and planning actions; the evening discussion was an amazing beginning for the "Hudson Valley Committee Against Gun Violence." Stay tuned for future meetings and information on this issue. In  the meantime, consider the following actions:

1.  Donate to the Brady Foundation.
2.  Write a thank you note to State Assemblyman Frank Skartados for passing NYS gun  laws that have embraced significant change in a timely fashion.
3.  Boycott Walmart and write letters to their corporate headquarters to urge them to stop selling semi-automatic assault weapons.
4.  Join the Million Mom March on January 26th or the Million Kid March on 2/17 in Washington, DC.
5.  Get your church or synagogue involved in the MoveOn initiatives.
6.  Write a letter to Harry Reid to request his support for President Obama's proposals; he is pivotal in garnering support from all Democrats.
7.  Go to Fovea and post a graphic or letter or item on the office walls that depict your visual protest in favor of gun control as part of a spontaneous 'pop up' exhibit on this issue.
8.  Attend the MLK celebration at the Howland Cultural Center on Monday 1/21 to remember MLK's plea to the American people to turn away from sowing the seeds of violence and continue with efforts against gun violence as part of his legacy.
9.  Circulate a poster created by Tim Delaney for the "Hudson Valley Committee Against Gun Violence." (Contact Fovea for further information.)
10. Write letters to Senators and Congressman who receive NRA support.
Some food for thought:  I've noted before how community involvement creates the social connections necessary to buffer the effects of aging and/or loneliness.  Activism is the counterpoint to alienation. Involvement is the antidote to inertia. Belonging is the opposite of isolation. We need to stay active and connect, not just for the positive outcome of all of our collective efforts for our community, but our individual brains need it. Research studies suggest that social contact is neuroprotective; people who have meaningful social connections have delayed onset of cognitive decline.  Furthermore, it is tied into the reward system. It feels good to do good and to be driven by purposeful action. While most people, may not be thinking of the personal benefits of volunteering, altruism, and activism, the human brain seems to know best.
Margaret Mead said "Never doubt that a small group of thoughtful, committed, citizens can change the world. Indeed, it is the only thing that ever has."  I have no doubt that Beacon citizens understand that collectivism and collaboration are powerful weapons and that synergistic activism is a true form of alternative energy!
Posted by dr. nadine revheim at 10:27 PM