Beacon Bits -- Out with the Old & In with the New

It has been two years since I moved to Beacon and just like the song, 'the times they are a-changing', I have borne witness to many changes along Main Street and have noted them with appreciation and pleasure in blog postings.  From my perspective, most of the changes have been very good in terms of economic development and environmental enhancement. So I thought I would end the year with a  small sense of closure and with great anticipation of some new beginnings by taking a brief look at a few of the recent transitions that are evident in our midst.
I'll start with the sad news that the art gallery Marion Royael closed.  Most businesses close when they are unsuccessful.  Rumor has it that Steve and Barbara (a true Beacon power couple) closed the gallery, which was prominently located across from the Howland Cultural Center and the The Beacon Theatre, because they were very successful and decided to pursue their dreams and riches in New York City.  While we wish them much luck in their venture, their presence and artistic flair and sensibility will be notably missed from Second Saturday openings and by the peripatetic residents and visitors who always stopped to take a long hard look at the traditional and avante garde artwork they exhibited. 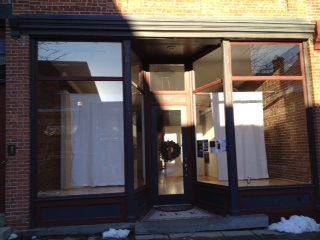 Perhaps not so sad, but more ambiguous news, Dim Sum Vault has "temporarily" closed its doors. Whether the restaurateurs played it "safe" as a posting on BCN suggested, or read the cards and realized that their fare may not have been competitive with the established Asian cuisine in town (i.e., Isamu, Sukothai, and even the tiny and delicious upstart Korean Seoul Food), is unknown. But for those who may have become aficionados, it is not a good way to treat loyal customers who want to dine out in a favorite place and have the desire for new restaurants to succeed in town.  As for me, whether or not they re-open may be a moot point. I took an out-of-town guest to eat at Dim Sum in October. While I was not impressed with the variety or the flexibility  of the menu and wait staff (e.g., an equivocal response to my request for garlic string beans, which was not listed), I was very put off when I was chastised as I called to say that I was running late for my 6pm reservation and then noted empty tables upon arriving at 6:15pm. Common courtesy and responsiveness to customer requests are a hallmark of the food industry that sells more than the kitchen fare for repeat customers. 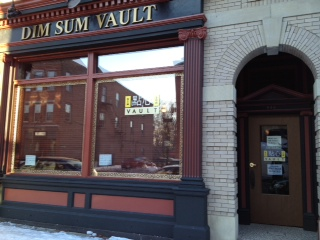 On the other hand, I eagerly anticipate getting a taste of the food and fare at Hop, which  I would award "Newcomer of the Year". Reports from friends and reviews that I have read are all glowing. I just haven't been lucky enough to stop by when it wasn't packed full house! So it is high on my list to visit and toast the new year with hopes of future fermentation of its congenial and tasteful presence on the East end of town. 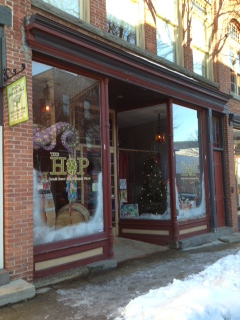 High on my wish list when I moved to Beacon was a store, like Williams & Sonoma, to be in the center of town. I knew that the ordinance on the books precludes 'chain stores and franchises', but I felt that the upscale nature of a flagship business such as W&S would bring in business from other nearby locales (e.g., Cold Spring, Garrison) and match the interest of the foodies and the CIA grads who populate Beacon.  Homespun with its gourmet food offerings was a partial wish fulfilment. Now I can say there are two more "parts" to the wished for "whole": Scarborough Fare, an olive oil and vinegar tap room at 257 Main St. 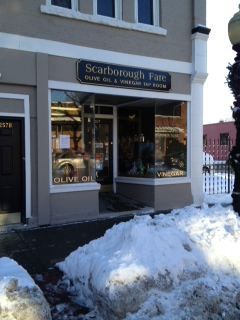 and Utensil, a kitchenware supply store at 480 Main St. (Time to burn calories in between.) 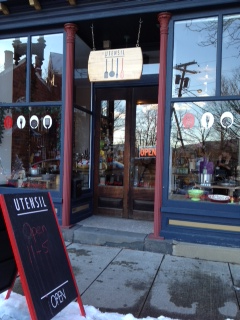 Perhaps oil and vinegar sounds too specific and limiting for a new business to be hopeful as a newcomer to the streets of Beacon, but mother and daughter owners Corey and Donna Wirthman, who opened this outpost store as a branch of its successful New Paltz business, offer much more with gift baskets to order with Italian pasta, Harney & Sons tea, Italian meats, German meats, Caciocavallo cheese, natural dips and hummus and gluten free items. Stop in for a taste and remember that food gifts are always consumed with gusto.
Meanwhile, who doesn't like to peruse the aisles and shelves of a kitchenware store made easy with the expertise of Utensil's owner, Emily Burke, who opened in November and has the prescience to be open during Second Saturday hours. Just as Lowe's and Home Depot offer the chance to find items that you didn't know you needed, a good kitchenware store feels like heaven to anyone who chops, slices, mixes, stores and otherwise prepares good food with style and flair;  let's welcome Emily to our midst
So while I did not get my hoped for Williams & Sonoma, I now have multiple choices for gourmet food and cooking utensils without leaving Main Street in Beacon. Spices and herbs anyone?
Another wish that I feel I have received as the year comes to an end is a new facade on the Howland Public Library, with a uniform brick wall that has improved safety features with less 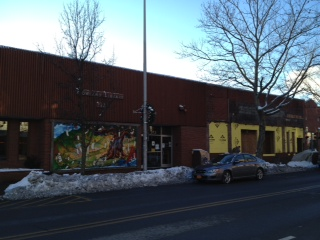 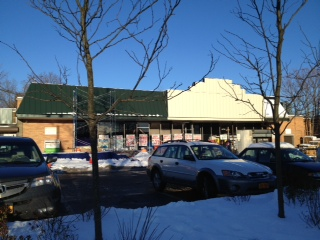 town.  This latter project fulfills the promise of the Main Street grant that Beacon received two years ago that allowed the town to work with store owners who wanted to improve the overall appearance of storefronts by returning them to architectural detailing reminiscent of an older era with uniform mill work and colorways that pull together a signature look for the street scape from West to East that bridges the unification of the two disparate towns, Fishkill Landing and Mattewan, that Beacon actually was 100 years ago. These improvements are welcome as we get ready for the Centennial Celebrations 1913-2013 that will begin  in January and last all year long. What a way to start the New Year!
﻿


﻿
﻿
﻿
﻿
Some food for thought:  New Year's always brings about the melancholic sense of loss for what did not occur in the preceding year and the eager anticipation of a fresh start for the coming year. Finding the balance between regrets and disappointments about the past and optimism and courage for the unknown and uncertain future is key in making the transition 'smooth' from one year to the next. May we all find the time to reflect in a meaningful way about what was and what might be while staying grounded in what is. May we all continue to find the strength for the changes we have endured and for those that are sure to come our way in the coming year.  Many blessings  to all for 2013!
Make a resolution to become a Friend of the Howland Library this year!﻿
Posted by dr. nadine revheim at 8:53 AM