The Howland Cultural Center is now hosting a monthly program on the third Wednesday of the month called Tribal Harmony, which is organized by Evan Pritchard, a local musician and historian. The program had previously taken place at the Falcon on the other side of the river and has found its new home here in Beacon.
Joan Henry's performance and vocal range was impressive and her jazz ensemble was stellar. I was moved by the energy that "Spirited" brought to the familiar and beautiful open space within the Howland, whether it was with traditional Cherokee prayer chants or unique presentation of some classic jazz pieces. The backdrop of African-American artwork on display for Black History Month added to the ambiance of the evening. 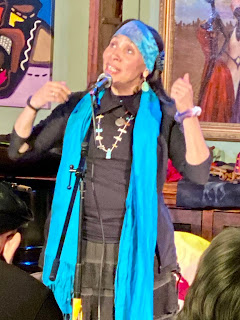 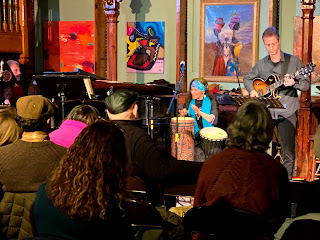 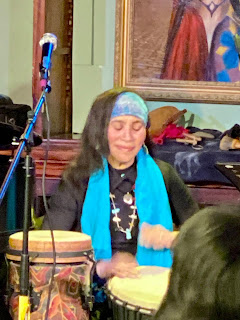 Consistent with the the theme of Native American stories and music, past and future, Evan Pritchard played some traditional and familiar solo flute songs (think R. Carlos Nakai) and arranged for a local activist to address the audience about updates related to local tribes like the Ramapo Indians and turmoil in Canada with the indigenous tribes and the government.
Events are planned for the future for March and April. If they are as well-received as the February event, they will become a lifeline for indigenous issues, which are our issues for all peoples. Seeing the t-shirt slogan that Joan Henry wore with an advocacy campaign motto focused on the disappearance of Native American women in western states like Montana, (available from the grassroots advocacy group, Phenomenal Woman), one could not help thinking about Pete Seeger's spirit coming to life at the Howland once again. 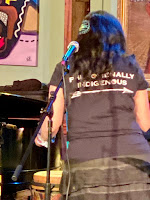 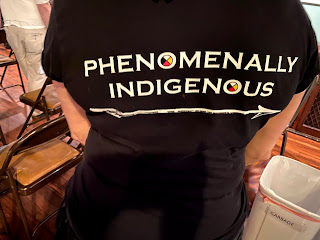 Food for thought: Music lifts the soul and gives voice to the passions of the people. Exposure to diverse cultures and varied musical expression continues to evoke what has come before us and what is now at hand so that we can better prepare for the future. Tribal Harmony is a simple, yet important, way to feed the soul. Joining this ongoing community at the Howland is consistent with the spirit of social justice and activism that has come before and that is still needed, more than ever. I will continue on this journey and hope to see others join in.