For years, I have passed the Eat Paint Love Studio on Main Street; its close proximity to Rite Aid, All You Knead Bread and Yanarella Dance Studio has made it an ideal parking spot, and despite its popularity, I've successfully parallel-parked there many times! (I owe the efficient parallel-parking skills to growing up, learning how to drive and passing my driver's test in Brooklyn.) So back in September during Pride of Beacon Day, I spoke to the women who run the studio and got a better idea about how the painting parties work and I decided that I would host a painting party for some of the local volunteers who work with Puppies Behind Bars at the local correctional facilities (namely, Downstate and Fishkill, both in Beacon.) Volunteering to spend time with Labrador retrievers who are being raised in the facilities to become service dogs for veterans and first responders is so rewarding, that I have done it for five years, while some of the volunteers have taken puppies into the community on outings for over a decade. I felt that we could connect and share some time together around the holidays and proceeded with planning the event with the studio and with the help of another volunteer. I made the decision to host the party so that we could paint multiple canvases filled with puppies and gift them to the office in New York City. It felt like it would be a gift all around -- time to relax with other like-minded volunteers and something to share with the staff at the organization who value volunteers and deserve some home-made holiday gifts to show how much they are thought of and appreciated. 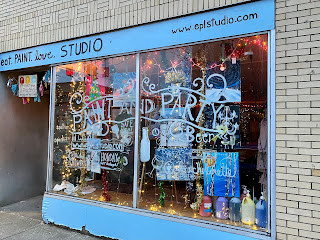 While the plan was for seven volunteers to meet up on Sunday, December 1st, the event was sidelined because of snow and ice that would detract from the festivity. Luckily, we were able to come up with an alternate date of Saturday, December 21st and all the original attendees were still able to fit it into their existing pre-holiday rush schedules. The event was meant to be two hours, but lasted over three hours! The time was mostly spent on painting (and not eating the brunch-like goodies that were brought along for rewards in much the same way that puppies get kibble for following commands.) With the assistance of the capable instructions given by Lorelei, our teacher for the day, who used a model painting inspired by a photo of a puppy sent to demonstrate what the subject of the paintings would be, the group of seven amateur artists produced a rendering that was recognizable as a Lab puppy with a variety of colors, distinct style and character that each person brought to the canvas. It was a delight, despite the self-criticism and lack of confidence along the way, but when the party was over, everyone felt accomplished since the difficulty of the painting was rated a '9' on a 10-point scale. 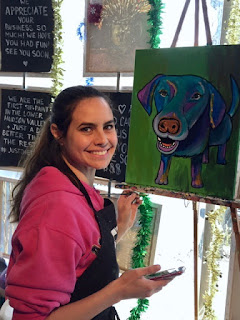 The festive spirit in the studio led to pondering what the office staff would think of the paintings, but our hope was that it could raise spirits for them as it did for us, and if the development officer chose to, he could feel inspired to use them as a fundraiser of sorts. The paintings were packed up and brought to the office in NYC before the end of the year in keeping with the season for holiday gifting. On a 10-point scale, the reception of the paintings and overall success of the painting party was at least a '9', on average, and in my eyes, a perfect 10! 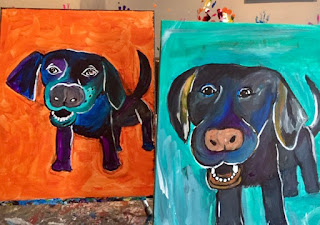 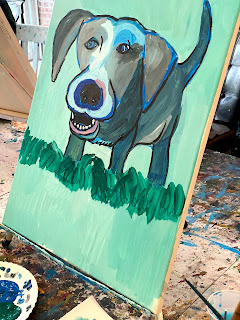 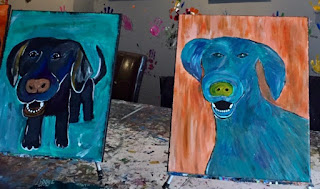 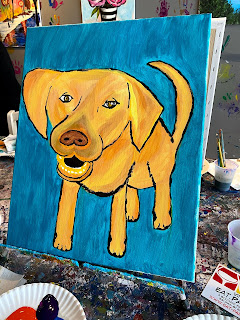 Food for thought: A group of adults with a common purpose and a pre-established connection can be brought closer together during a painting party, like the one that was organized at Eat Paint Love Studio this holiday season for the PBB volunteers. I would hope that the 'real' artists or skeptics in town would not minimize the power of creativity for those who are not talented or destined to produce valuable art. I would also hope that more people who are curious would do as I did, and stop in and talk with the women about organizing an event; they are very helpful and always available throughout the preparation for the event and right up to the pick up of the paintings  Participating in a painting party is a reminder that free form play is good for adults. Art education and exploring new skills using the arts is not just apt curriculum for children. While painting studios may be filled with birthday party celebrations or completion of scouting projects for a badge for the younger crowd, the value of bringing together diverse neighbors, or city council members who do not know each other outside of the context of work meetings could be explored. The field of 'art therapy' does not need to be limited to clinical settings. The therapeutic art process of shared time and space of parallel play with other human beings is a gift all its own. Think about what painting party you would like to host this year -- what would your subject be, what would you do with the finished products, what community do you want to build? If you can think about it, you can paint it! 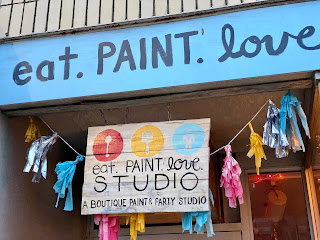