Beacon Bits -- Give Vets a Chance

Art in the Sanctuary


One block south of Bank Square and Beacon Visitor’s Center, next to the fire station


A Special Tribute to Veterans with 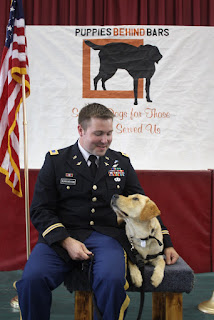 Guest Appearance by President and Founder of PBB


Peg Vance has been photographing with Puppies Behind Bars for the past 6 years. She loves it. The photographs are given to the inmates. They are for their personal use as well as to be shared with their families. Her hope is that the images will always remind them of their dedication, hard work and commitment and that the photographs will bring back the love and tenderness they shared with these beautiful animals. Peg is also a letterpress printer and has a studio in Columbia County.


Come learn about a non-for-profit and its special mission for Iraq and Afghanistan war veterans, its local volunteer opportunities, and other ways to support this notable organization; PBB has been awarded 4-stars by Charity Navigator.  Find out more about the recently released documentary film, Prison Dogs. And perhaps, come to meet a puppy or two!
Food for Thought: I bypassed writing posts in October (no tricks or treats) because I was busy, busy, busy. One of the highlights of the busy month was attending the Puppies Behind Bars fundraiser in New York City featuring the documentary film Prison Dogs--the best documentary I have ever seen from the human and canine perspective--highlighting three dogs, three inmates and three Iraq/Afghanistan veterans with PTSD. This photography exhibit will make you want to locate the film on iTunes and learn more about this amazing non-profit organization that has Beacon connections at the local Fishkill and Down State Correctional Facilities. If you are a veteran, know a veteran or appreciate a veteran, come and be part of this feel-good, community-oriented event; you will leave as a more hopeful person, guaranteed.