Nowadays, we are hearing a lot about democratic socialism and we have formed some opinions about what makes it good for the people. One of my observations from the 'other side of the pond' while visiting friends and family is that there is no 'free ride'; every benefit in a democratic socialist society comes with a cost. But another observation was made during last winter's trip to Oslo after meeting a relative who is 'house chief' for a cultural center sponsored by a large banking firm. Sentralen is a meeting place, workshop and performance venue. It operates as a cultural hub with six performance stages, a restaurant, various kinds of studio space for up to 350 people working for nonprofits, social enterprises, as well as, musicians and artists. The amazing thing is that the project was funded by the bank itself (Sparebankstiftelsen DNB) and continues to be managed by the 'bank', which is a private savings bank foundation, owning 10% of DNB, one of Northern Europe's biggest banks. The DNB Savings Bank Foundation has the main objective of contributing to charities in Norway, small local projects to large national ones, and most of the contributions are related to art and culture.  Imagine that -- a profit making banking institution being invested in the arts as a long-term commitment and investment, and doing so with daring creativity and by engaging all kinds of people and volunteers in local communities! Other than the opening of the performing arts center in downtown Oslo in February 2016, DNB has an art collection loaned to Norwegian art museums; the restoration of old stringed instruments that are used by musicians; and the funding of Oliafur Eliasson's art work in the Oslo Opera House--impressive endeavors since the 2002 formation of the foundation. 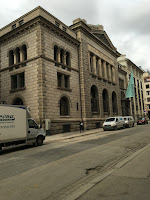 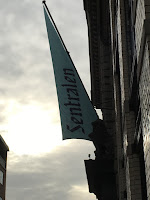 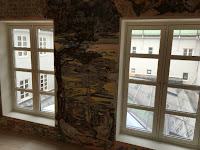 After returning to Beacon, it made me sad to think that the bank that held the mortgage on The Beacon Theatre did not have the same prescience to hold onto the property and proceed with the original plans to renovate the theater into viable space with several smaller theaters suitable for film, music, dance, opera, live performance, and studios for nonprofit businesses and social entrepreneurs. (Think the old Beacon High School and BeaHive all rolled into one with a touch of the Bardavon and the Downing Film Center!) Why turn it over to a developer who will garner profit and develop the property as he sees fit, when the bank doesn't need a middleman to do that at all? 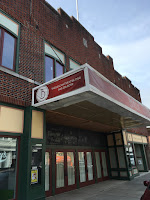 I think that's what I learned about the differences in corporations in a social democracy--they give back to the people and build community with their profits. That takes vision and it is always grounded in the common good. And success is bound to follow. No greed needed.

Food for thought: It still amazes me that The Beacon Theatre did not get the funding to restore the building into what it was meant to be. Maybe it was learning about  the Norwegian connection that hooked me on the theater project -- Sonja Henie, the Norwegian Olympic ice skater who turned into a Hollywood movie star performed there. I actually pledged $2700 at the kick-off fundraiser in September 2010. That was what I thought everyone in the community would do. And then to see so much progress on Main Street over six years with restaurants, stores, music venues opening left and right, while the theater renovation stalled, it perturbed me to discover why the theater renovation was never brought to fruition. One wonders if it is really too late to turn it around and get it back on track to be an historic landmark and contemporary performance space...one can only hope. 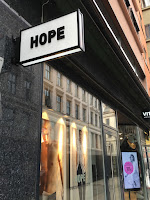