Beacon Bits -- Reach for the Stars!

I attended the annual meeting of BeaconArts on June 24, which was held at the "Red Barn" at Long Dock, and hosted by Scenic Hudson. It was a beautiful evening with overcast backlighting and a muted sunset as the ferry crossed the river with commuters on board returning to Newburgh from the Beacon train station. 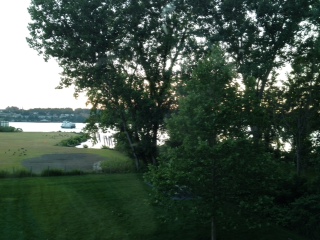 It felt fitting to be down by the river close to the eve of "Sankt Hans", a traditional Norwegian festival when bonfires are lit by the water's edge commemorating the festival of John the Baptist along with Viking-pagan rituals performed on midsummer's night. There were no bonfires in Beacon, just a lovely gathering of BeaconArts members, celebrating the culmination of a year with news and announcements of wonderful projects that they have been involved with -- Riverfest, Beacon Independent Film Festival and Constellation.

The energy in the room was high as Stephen Clair spoke of the line-up for Riverfest  on 6/28/15, rain or shine; when Terry Nelson reviewed the entries and theme ("Identity") for the coming year's BIFF to be held at the University Settlement on 9D on September 18-20; and when Melissa McGill spoke of her dream come true with the opening of the landscape art exhibit called Constellation on June 28th, an installment of lights on Bannerman's Island surrounding the castle and evoking the ghost of the building's skeleton and remniscent of the Lenape Indian's guiding stars.

I sat at the meeting and felt the impact of human ambition and drive as I witnessed each person telling the tale of their dream unfolding successfully. I realized there were more dreams in the room that had unfolded and/or are still in the works and not fully developed. I realized that the culture of Beacon supports people dreaming dreams. Big dreams. Dreams that get realized. I knew that everyone in the room had the hope of reaching for the stars, from Scenic Hudson's success in land conservation to BeaconArts' promotion of the art culture in Beacon for over ten years with support for gallery openings, the music scene and film and live theater. And I remembered another person, not in the room, but ever present to Beacon, and his own dreams; how Pete Seeger would be so proud to see Beacon flourishing with all of its dreams!

Food for thought: It's my 4th anniversary of blogging (my first post was 6-21-11), and I believe that I can claim I have the longest running and extant blog about Beacon NY. "Newcomers" (A Little Beacon Blog, and Beacon Streets) outshine my blogging skills with their high tech, hipster presentations, but my down home approach will continue to highlight the heart and soul of Beacon. I will always write from the heart. I am proud to celebrate my 81 posts; 17 followers; 15,603 hits; and free-of-advertising blog posts that are written on the fly, in between my involvement as a friend and supporter/volunteer  of many groups in the community, while working 6 days/week--work not related to my blog at all, with the exception of practicing positive psychology. I think I can refer to myself as the NPR of Beacon blogs -- the independent and commercial-free 'station' for people who think, feel, react and want to explore wide-ranging and diverse topics without bias or influence from marketing. I guess that was my dream when I first starting blogging and it continues to be my dream. So do, please, come 'dream a little dream with me'; it just might turn into a big dream, as you too might reach for the stars!


Thanks to Beacon Citizens Network for having a link to Beacon Bits!