The autumnal blaze seemed to linger longer this year. Gratefully. The almost perfect weather throughout October was very much appreciated after the anomalies of the last two year's snowstorms and hurricanes arriving on October 29th. So this year felt more like a treat than a trick and was marked by some memorable events experienced for the first time, as well as the "last."
October 4th was the official opening of he Towne Crier Café in Beacon. As a new member, I used my free concert ticket on October 5th to see Battlefield Band from Scotland. I had never been to the Towne Crier in Pawling so I cannot compare the new with the old; however, I was satisfied with the venue, the ambiance, the music and the energy of the crowd. Pawling's loss is Beacon's gain! It will be interesting to see how things settle into a groove once the rhythm of the kitchen and wait staff and acoustical fine tuning are all in full swing. Towne Crier is a definite plus for Main Street and I know my first concert is far from my last. 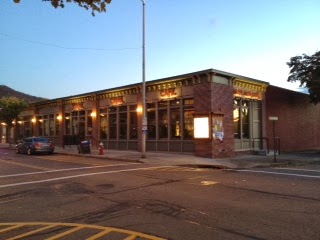 A second first this fall was a sail on the Clearwater, which embarked from the pier in Cold Spring on Columbus Day weekend. Despite the fact that there wasn't much wind and not enough singing, it was a memorable experience as I took in the panoramic view and unique vantage point to gaze at Constitution Island and West Point to the south, Little Stony Point and Breakneck to the east, and Storm King to the north and west. It was a most beautiful way to float along on the Hudson on a warmer than usual October day, remembering the working, wind-powered sloops of yesteryear, while celebrating the vision of Pete Seeger's environmental teaching vessel in the present. Supporting the mission of the Clearwater continues to insure a watchful eye on the state of the Hudson River for the future. 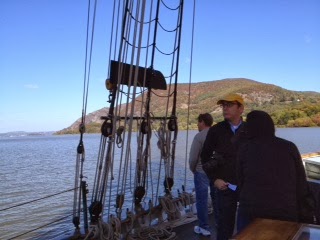 Alas, amidst the firsts, I picked up my last share from Obercreek Farm, the CSA that I joined for the 2013 season after two years of membership in the CSA at Common Ground Farm. 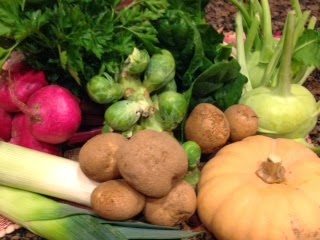 The bounty of the crops this year was notably improved. The sight of this sample autumn harvest of cauliflower, broccoli, leeks, potatoes, kohlrabi, spinach, scarlet turnips, and autumn crown winter squash was enough to inspire a potato/leek soup and roasted root vegetables medley, whetting the appetite for the culinary delights of this last share, while signing up for next year's growing season.
Food for thought: New beginnings in the midst of endings keep the cycle of renewal going strong. Novel experiences inspire us to explore further. Deeper. We develop new habits, traditions and routines when we indulge in the same thing over and over and over again. Something new becomes something old, just as the familiar Girl Scouting song says, we are reminded to -- 'make new friends, but keep the old, one is silver and the other is gold.'
Potato Leek Soup
1-1/2 stalks leeks, cleaned, sliced and roughly chopped
5-6 potatoes, peeled and cubed
48 oz. broth (I use chicken)
12 oz. water
Butter, canola oil, parsley and tarragon (fresh or dried - as you like)
Salt and pepper to taste
Saute leeks and potatoes in a combination of 2 tbs. butter and 1 tbs. oil in a large pot until leeks are translucent (about 15 min.). Add broth, water, parsley, tarragon, salt and pepper to vegetables and cook for about 1-1/4 hrs. Puree soup. Add 1/s cup milk or cream (optional.) Return to heat. Serve with chopped fresh herbs sprinkled on top. If milk/cream was not added to the soup, a dollop of sour cream on is a nice garnish.
﻿
﻿
Posted by dr. nadine revheim at 3:06 PM