What do 40,000 Norwegians and the members of the Beacon Sloop Club (BSC) have in common? A love of Pete Seeger's song, "My Rainbow Race". On April 26, 2012, in response to two mothers tweeting a meet-up to sing the Norwegian lyrics of the song ('Barne Av Regnbuen') as translated by Norwegian 'folk singer' Lillebjorn Nielsen, throngs of people gravitated to the streets of Oslo outside the courtroom where Anders Behring Breivik's trial was being held. Breivik had announced that the "Marxist" song was being used to "brainwash" small children and that he detested it. The Norwegian response was to "irritate" him by their choral singing as a sign of unity for the 77 victims of Breivik's massacre on 7-22-11 and for their families and friends. The song was sung by groups of citizens across cities and towns in Norway and the people felt they "won" the confrontation peacefully.

On Friday, 5-4-12, the members of the BSC gathered for its monthly business meeting, potluck dinner and celebration of Pete's 93rd birthday, which was May 3rd. During the circle of song, the musicians played "My Rainbow Race", as I had requested during the announcements, to join in the sentiments expressed by the Norwegian people: that hope for the future of the world resides in multi-racial-ethnic harmony, unity and peaceful coexistence under "one blue sky above us." As you can see in the YouTube video posted by the secretary of the BSC (Vane Lashua), Pete Seeger's presence and active leadership still makes a small group of  people unify to sound better and stronger than ever, making it a very special event to witness. 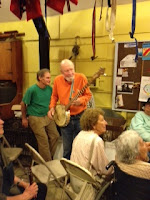 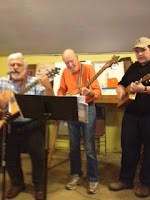 As a testament to Beacon's global connections, the link and story about the singing of Rainbow Race on this side of the Atlantic was published by NRK in Norway. 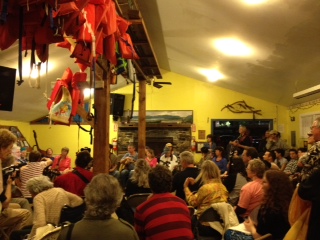 [Chorus]
One blue sky above us
One ocean lapping all our shore
One earth so green and round
Who could ask for more
And because I love you
I’ll give it one more try
To show my rainbow race
It’s too soon to die.

Some folks want to be like an ostrich,
Bury their heads in the sand.
Some hope that plastic dreams
Can unclench all those greedy hands.
Some hope to take the easy way;
Poisons, bombs. They think we need ‘em.
Don’t you know you can’t kill all the unbelievers?
There’s no shortcut to freedom.
[Chorus]
Go tell, go tell all the little children.
Tell all the mothers and fathers too.
Now’s our last chance to learn to share
What’s been given to me and you.
[Chorus] 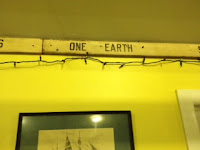 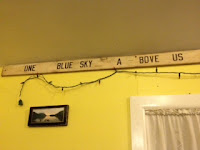 Some food for thought:  A simple and implicit connection between the hearts of the people at the BSC,  and those in Norway, occurred along the banks of the Hudson River, just slightly north of the "Storm King Fjord", when voices lifted up "My Rainbow Race" in song. The natural surrounds of Beacon and the sensibility of a community striving for "mindful" living in this beautiful world fraught with unnecessary violence echoed across the Atlantic to the Oslo Fjord and reverberated with empathy and understanding about the grace and healing found in Pete Seeger's timeless song and ageless mission of peace.

Rainbow Potluck Medley
This is a sweet and sour grain medley that is easy to make and serves about 8-10 people at a potluck.
It is vegan-vegetarian, but not gluten-free
Follow the directions on the package to prepare 1 cup uncooked quinoa and 12 oz. farro. Set aside to cool. Blanch 1 crown of broccoli and cut into small pieces. Cut 1/2 to 1/2 fresh, ripe pineapple into small cubes. In a small bowl, mix 1/4 cup olive oil with 2-3 tbs. fig-infused vinegar, 2 tbs. local honey, 2 springs fresh rosemary and 3-4 springs of parsley; add salt and pepper to taste and blend thoroughly. When grains are cool, blend them together, add pineapple and broccoli. Chill for 1 hr. then add oil mixture and chill for 1-2 hrs. before serving.  (White canneloni beans can be added or substituted for broccoli and/or pineapple.)
Posted by dr. nadine revheim at 6:51 PM